How to Identify Spiders

It may seem strange to compare spider identification with detective work or criminal investigation, but there are uncanny parallels.

Both adopt similar methodologies and intellectual processes searching for clues, deciphering and evaluating evidence, ruling out suspects and hypotheses, and confirming findings with corroborating facts and observations. We may pore through many texts and figures, or even go into DNA analysis.

We hope we can offer useful tips in this chapter – some for the novice, and some for the advanced hobbyist or biology student who wishes to delve deeper into spider taxonomy. For both categories of readers, we aim to help them achieve the personal satisfaction of piecing together a jigsaw puzzle or unravelling a mystery.

Is it a spider?

The first step in identifying a spider is to determine that it is indeed a spider and not a spider-like arachnid, such as the harvestman pictured here. Spiders have two main body parts, eight legs, and sex organs as shown in the section below. A spider also differs from other arachnids by having silk-spinning spinnerets.

What is its sex?

The second step is to determine if the specimen is a male or a female. Adult males possess specially modified palps (feelers) which are often expanded like a pair of boxing gloves.

The apical (far end) segment of each male palp bears a structure like a curved or twisted hypodermic syringe with a bulb that can expand and contract. The embolus (the “injection needle”, white arrow) delivers sperm to the female and the bulb provides the pumping action for this process.

In contrast with the adult males, the palps of females (and juvenile males) are simple and leg-like, without any modified structures – although the palps of sub-adult males may be rather swollen.

Most mature female spiders can be easily recognised as female as they bear a sclerotised, shield-like epigyne (yellow arrow) on the ventral side of their abdomen. In spiders such as tarantulas whose epigyne is not obvious, the only visible clue that it may be a mature female will be its relatively large size. Which family is it in?

The next step is look for morphological and behavioural characteristics that distinguish your specimen from spiders of other families. The discernible diagnostic family characters of spiders are described and often illustrated in the corresponding literature, guidebooks and online spider identification websites. It will be necessary to acquaint yourselves with the morphological terminology (names of body parts). You may do so by referring to the arachnological glossary.

To get to the genera and species classified under the family, you may use one or more of the approaches in the following sections.

You may compare your specimen with the images depicted in this guide and similar publications. You should go beyond colouration, size, shape, and general appearance. Where finer morphological details have been illustrated, you should verify with a hand-lens or a stereoscopic microscope that your specimen shows similar structures. Such details would include eye and spine arrangements, presence of special hairs, and configurations of body parts such as claws, mouthparts, spinnerets, and genitalia.

You can identify species by matching specimens with the thorough descriptions given in taxonomic literature. Such descriptions often contain figures showing the spider’s morphology, details of the external and internal genital structures, and information regarding the distribution and locations from which the specimens were collected.

It is particularly useful to read the “Diagnosis” section leading each description. In these diagnoses, synapomorphies (a character or characters uniquely shared by members of a closely-related group) are provided. The comparisons made with similar-looking species will be useful in helping you to determine the identity of your specimen.

Learn to use keys

In theory, a properly structured identification key included in some of the guidebooks should take you to the correct “taxon” (taxonomic unit, such as family, genus or species). A key is a decision tree with repeatedly forking branches; you make a choice at each couplet (like a fork at a road junction). This will narrow the range of possibilities and should eventually guide you to the correct taxon. Extremely useful databases are available online for some of the more diverse families, such as Pholcidae, Salticidae and Theridiidae. They provide not just a guide to the relevant taxonomic publications, but also extensive illustrations and notes on geographic distributions and phylogenetic relationships. For further details, see Books on Spiders and Online Spider Identification Websites.

More in-depth descriptions are available in scientific journals, often well-illustrated if published within the past 50 years. The search for such publications is now greatly facilitated by the World Spider Catalog, a constantly updated online bibliography of all the taxonomic literature for the nearly 50,000 described species of spiders of the world. Once registered, users can obtain free downloads of PDF files of most primary material (original descriptions) and secondary material (re-descriptions, monographs, taxonomic reviews).

Examination of the specimen under a hand lens, with a magnification of 10× or more, will reveal many structures useful for identification purposes.

For a more advanced level of identification, it will be necessary in most cases to examine the genitalia. For this, a 20x to 50× stereoscopic microscope, preferably with zoom capability, will be required. For microscope observations, it is best to use the readily available goose-necked LED light sources.

Enthusiasts wishing to examine fine structures such as the leg claws or genitalia of smaller spiders will need to use a compound microscope (40x to 200x).

Taxonomy is simpler for beginners if each taxon is defined by a single and exclusive “diagnostic” characteristic. There are such cases, especially at the family level, e.g., the exceptionally large pair of anterior median eyes may be regarded as the single-most diagnostic character of jumping spiders (Salticidae). However, some taxa are defined by a combination of several characters, some of which are shared by other taxa. For instance, several families have members with only six eyes, instead of the usual eight. In certain families, such as Pholcidae, some genera have six eyes while others have eight; and yet other genera include both six-eyed and eight-eyed species. Likewise, although most typical members of the Araneidae build orb webs, the ability to build orb webs is not necessarily an exclusive characteristic of this family. Members of several other families such as the Anapidae, Tetragnathidae and Uloboridae also build orb webs.

Certain families, such as Clubionidae, lack clearly defined diagnostic characters. Some spiders originally placed in the Clubionidae were later moved to the Corinnidae and have more recently been transferred to the Liocranidae. These families can only be identified through a process of elimination. Furthermore, boundaries between families, between genera and between species are not cast in stone; they may be redefined as a result of new phylogenetic research, molecular analyses or ultramicroscopic studies.

Accurate identification of spiders at the species level often requires examination, under a stereoscopic microscope, of the copulatory organs (see male palp of Ovia macritchie; and epigyne of the same species). In some, the examined structure may appear slightly different from what has been depicted in taxonomic literature. It is then a matter of applying one’s experience in determining if they belong to different species. Nevertheless, uncertainties may be reduced with two approaches. First, it helps to tilt the specimen slightly at different angles as the altered perspectives may significantly change the appearance of complex genitalia. Second, it is advisable to examine a series of specimens, rather than a single individual, to get a sense of the degree of intra-specific variations.

One must avoid identifying spiders based on photos alone. This process may be acceptable for common or very distinctive species but is completely unreliable for most. Many species of tarantulas (Theraphosidae) may appear morphologically indistinguishable but are distinct when their genitalia are examined. The same can be said about huntsman spiders (Sparassidae), wandering spiders (Ctenidae) and wolf spiders (Lycosidae). Some species of orb weavers (Araneidae) and crab spiders (Thomisidae) exhibit marked intra-specific colour variations or polymorphism. Some members of both families also display sexual dimorphism, where males and females look quite unlike each other in size, shape or colour.

You should be wary of wild speculations on social media based on the superficial resemblance of totally unrelated species in their colouration or structural peculiarities such as leathery bodies, unusual abdominal protuberances, or strongly developed first legs.

Identification keys should not be regarded as a magic wand. They can be defeated by exceptions, and omissions of new, undescribed or uncommon species.

Molecular analysis may be useful in delineating species and reconstructing phylogenetic (ancestral) relationships between genera and families, but on its own, it is also not a magic wand. New approaches integrating molecular analysis with the traditional studies of morphology, ecology and behaviour should add clarity and insights to our understanding of spider systematics.

A serious arachnologist does not hastily declare that he or she has discovered a new species before carrying out an exhaustive literature search and cross-checking the specimen (or better still, a series of specimens) against the published descriptions of all possible candidates within the genus (and sometimes beyond the genus). In cases where the only reference materials available are antiquated descriptions, it may mean having to read in Latin, German, Dutch or French. Although online translation tools may reduce some of the difficulties, uncertainties will often remain, as the original descriptions may be vague, with no illustrations.

In theory, such problems of identification can be solved by the examination of holotypes, paratypes or authenticated voucher specimens linked to the original descriptions. However, this is not always possible as not all museums will allow any researcher access to the type material. Even if they do, the type specimens (or parts of type specimens) may be damaged or lost.

The identification of an interesting and perhaps unusual spider may take a long time. But all the painstaking work can provide you with great satisfaction, especially if the subject of your investigation turns out to be a new record for your country or a species new to science.

How to identify spiders By using a common reference in a standardized way, the SPD will help bridge diverse disciplines, such as genomics, taxonomy, systematics, evolution, ecology, and behavior. This article is adapted from the How to identify spiders chapter in A Photographic Guide to Singapore Spiders by Joseph K. H. Koh, David J. Court,  Chris S. P. Ang and Paul Y. C. Ng, 2022. 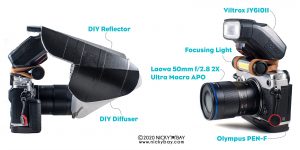